Worship continues to be limited to 25% capacity of the sanctuary. Click here for instructions on how to attend.

If you are not ready to attend worship in the sanctuary, you can continue watching online. 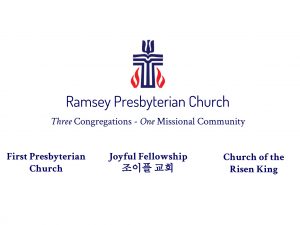 Like many mainline churches in America, our story begins in the mid ’80s…1785 to be exact. In fact, the beginning of our story is shared with the Ramapough Reformed Church in Mahwah, NJ. In the 1820’s, theological differences led a dissident group of 37 men and women, including the pastor, to found The True Dutch Church of Ramapough on a small plot of land donated by James and Maria Ramsey. The church grew with the surrounding community and in 1908, the congregation of 75 members was received into the Presbytery of New Jersey, and became The First Presbyterian Church of Ramsey.

Our story is similar to many historic churches that saw their membership peak in the middle of the twentieth century.  However, how we decided to address our changing religious landscape is a little different. Since 2012, Rev. Huston and the congregation of First Presbyterian have been working to explore ministry partnerships with other Presbyterian congregations. In 2018 a vision for “Three Congregations – One Missional Community” began to emerge as the congregations of First Presbyterian Ramsey, Joyful Fellowship (a Korean language congregation), and The Church of the Risen King (CRK – a new church plant) looked to partner in our ministry to the people of Ramsey and beyond. The partnership, which we are calling Ramsey Presbyterian Church, is still in the development phase but it is already bearing fruit. There is even talk of expanding the number of partners by adding a Spanish language congregation in the future.